Health Cabinet Secretary Mutahi Kagwe has given out conditions under which countries wishing to evacuate their citizens from Kenya should adhere to.

Speaking on Wednesday afternoon while briefing the country on the state of coronavirus, Kagwe maintained that countries wishing to evacuate their citizens from Kenya should do so under the condition that their planes fly into the country without having any passenger on board.

The CS, however, maintained that all foreign nationals in the country were free to stay in Kenya if they so wish. He added that no foreigner will be forced to leave the country.

Kagwe communicated that Kenya was not going to close other county boundaries adding that they were taking into considerations where the victim comes from and not where they were tasted.

“When we analyze data, we analyze based on where one comes from, not where they were tested” stated Kagwe.

This came at a time the CS announced that 9 more people had tested positive for COVID-19 bringing the total number of confirmed cases in Kenya to 225.

Kagwe revealed that the 9 newly affected patients were all Kenyans and none had travel history.

“In the last 24 hours, 800 samples were tested and 9 people tested positive for COVID-19 bringing the number to 225. None of them has a history of travel. 5 from Nairobi and 4 from Mombasa. They are aged between 9 and 69 years old,” revealed Kagwe. 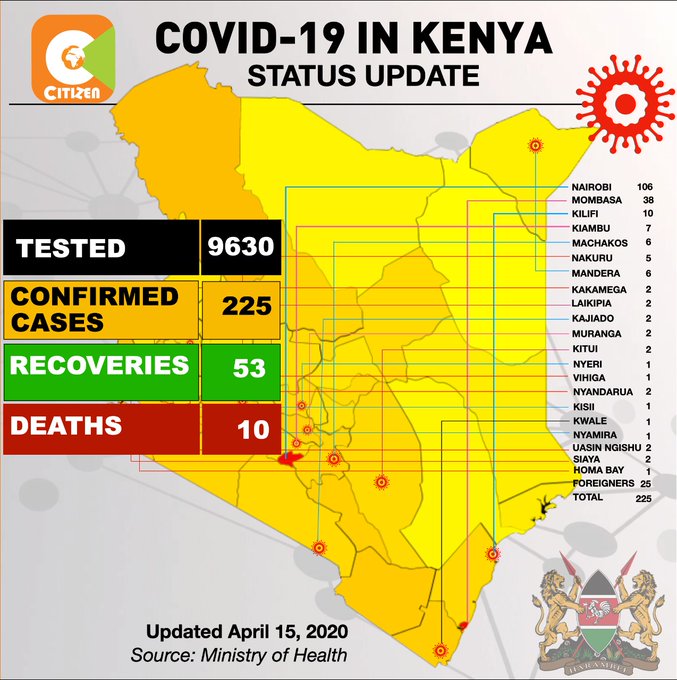 One person was also reported to have lost his life bringing the total fatalities to 10.

“We also have 12 new discharges bringing the total number of people who have recovered to 53. One person has also lost his life bringing the number of deaths to 10,” he added.

At the same time, Kagwe warned the public against public gatherings adding that the number of coronavirus positive cases grew in some areas because of gatherings.

He assured Kenyans that the government had partnered with some organizations to produce enough masks which are of food quality and affordable prices.

“There are numerous organizations that are now making masks from as little as KSh 5. The Kenya Bureau of Standards has set up measures that include how to handle the masks. We are aware that handling of some of the masks has not been hygienic,” he stated