Traffic officers have accused Musician Stevo Simple Boy of cruising at a speed of 150 km/hr at along Thika Super Highway which allows a top speed limit of 110 kilometers per hour (kph).

Police say a Subaru Impreza was cruising at 150 km/h in a 110km/h zone along Thika road about 7 pm on Monday.

The car was not pursued by police but was followed from a distance where the  Subaru and driver were found in Pangani. 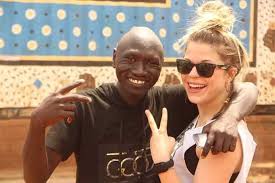 The driver, an upcoming musician, Steven Otieno by the stage name Stevo Simple Boy risks being fined for over speeding and losing his license for six months.

Stevo Simple Boy made headlines with the song Mihadarati, one that has been a meme on social media.

In an exclusive interview with Uhondo News, the singer reminisced his life as a struggling young man from Kibera.

“Before this song came out, I had worked for 10 years while releasing songs and rehearsing when it comes to music,” he said.

“I have been working as a ‘Mjengo” guy and I’m still doing that to get my daily bread. I have learned that nothing comes easier, you have to work so had to get to where you want to be.”

He says he wants his songs to go across the borders and not just Kenya.

Ali Kiba Reveals Why He Fired His Manager Esilovey

A Week in a Minute: 6 Hot Stories That Set Internet on Fire This Week