Jubilee candidate for the Kibra by-election scheduled for November 7th Macdonald Mariga has shown photos of him on the ground engaging in the famous Kenyan men rite of passage job ‘mjengo’ while he gave a helping hand to Muslim brothers and sisters with the construction of Laini Saba Mosque in Kibra.

Laini Saba is one of the five wards in Kibra sub-county.

Joined and gave a helping hand our Muslim brothers and sisters with the construction of Laini Saba Mosque in Kibra #TukoPamoja pic.twitter.com/gw39MhwU99

A number of Kenyans hailed him for the bold move

“Kazi mzuri hustler, we will vote for you Man to Man”-Manchester United.

“U r the next kibra MP Mariga whether they like it or not”-Dr. Erick Munialo.

On the other hand others called out his aid as a mere publicity stunt. 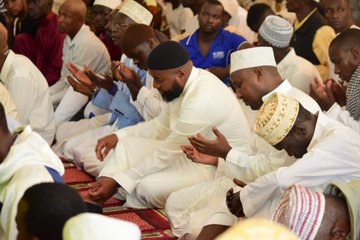 On the other hand Hassan Joho today joined their candidate Bernard Otieno Okoth for Friday prayers at Makina Mosque in Kibra. He exuded confidence that Okoth will emerge the winner in next week’s by-election. He was accompanied by Director of Campaigns Junet Mohamed and other leaders.