It seems like being a celebrity comes with a price. Many will do anything to remain relevant even if it’s tarnishing their image.

However, these celebrities have never been involved in any scandal that would tarnish the brand that they have struggled to build. 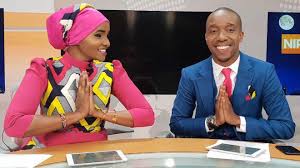 Despite being on the eyes of the public,  Citizen TV power couple have proven that you can be a celeb without having dirty sideshows.

The duo have won the heart of Kenyans with their humility.

Lulu Hassan and Rashid are one of the favorite Kenyan media personalities who are envied by many people.

It is for this reason that many fans never miss the opportunity to wish Rashid Abdalla and Lulu Hassan well in their marriage.

Nameless and Wahu are our Kenyan version of Beyonce and Jayz.

The two have been together for over two decades and still share some undeniable sort of chemistry.

They are blessed with two beautiful kids, the couple looks even more strong and we celebrate them. They have made two little human beings who are so adorable and who complete their young family.

Statehouse spokesperson and Head of President’s Strategic Communication Unit (PSCU) has been carrying herself with grace ever since she was gracing our screen.

She left Citizen TV to Statehouse after close to 16 years in the newsroom.

She recently got married in an invite-only ceremony at Ol Pejeta Conservancy in Laikipia County.

Considered by many as the First Lady of Kenyan hip-hop, thanks to her illustrious music career spanning decades, Nazizi has inspired a whole new generation of fearless femcees.

Her recent songs have proved that she is more than just a rapper as she flaunts her singing.

She is one of the youngest news anchors who made her television debut in 2013 and has since become a well-known figure, thanks to her anchoring job at KTN News.

She came to fame after hosting Citizen TV’s wedding show.

She was recently appointed Going Green Campaign ambassador and is also the goodwill ambassador for Macha New Year’s Eve celebrations.

She once revealed about her struggles with a foreign accent.

The rapper couple have for the longest time won the hearts of Kenyans with their amazing chemistry.

The two have focused on their career and family.

Actress Catherine Kamau is popularly known as Selina as one of the very few actresses with no single scandal.

She is married to Film Producer Phil Karanja and the two are expecting their first child together.

The legendary reggae musician known as the love child has maintained a low profile about his private life.

Uhuru’s Move Gets Kenyans Talking on Who Between Him and Ruto...

A Week in a Minute: 7 Hot Stories That Made Headlines...